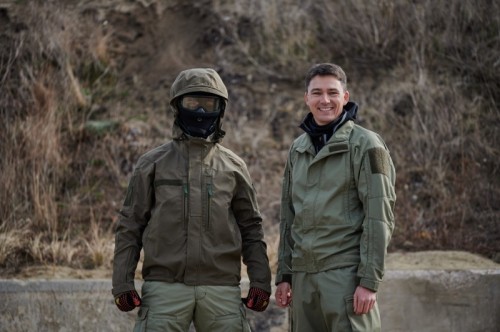 To me, Paul Jennewein is like MacGuyver: he has every piece of gear you can think of with him in testing situations. Paul is a product specialist for flame-retardant (FR) mission combat clothing. At the test site, he immediately feels at home and tells me that he wants to test two scenarios that users in the military are exposed to: one is an accident during refueling of a vehicle or aircraft, and the second scenario involves an infantryman who gets caught in the explosion of an improvised explosive device (IED). The tests were performed by a professional stunt team in a controlled environment, secured by fire fighters.

Accident during refueling of military vehicles or aircraft

When refueling vehicles and aircraft under combat conditions at all times of the day and night, fuel frequently spills onto the clothing of the refuelers. Clothing wetted with flammable fuel can subsequently be ignited by contact with an ignition source such as sparks, extremely hot surfaces or the like. A Defense FR rain suit with GORE-TEX PYRAD® technology was tested. Jan Singh simulated this tank accident by spraying the right side of the suit with diesel and gasoline and then igniting it close to the ground by means of a small gas deflagration.

Improvised Explosive Devices (IEDs) unfortunately continue to be a threat for soldiers on missions globally. In this scenario, the effects of the heat and flames caused by an IED on mission combat clothing are examined. Flame-retardant combat uniform made of PYRAD® fabric technology By GORE-TEX LABS, as worn by defense personnel in many European countries, is used. Jan Singh simulated this scene using two large initial gas explosions and a continuously burning gas flame as an additional heat source. Lycopodium was used as an additional fire effect in the background.